So far every episode has either centered around drama with Kate or featured her prominently amping the stakes of the central conflict (Lizzie excelling at rhythmic gymnastics, for instance, but getting mocked and sabotaged by Kate). As mentioned every time, Ashlie Brillault can’t act to save her life so her scenes are always intrinsically cringeworthy. The casting is fully inexplicable, as she doesn’t even have an interesting physicality – the showrunners cast a pretty blonde girl as the foil for our pretty blonde protagonist. You know how Megan Fox was the hot bitch to Lindsay Lohan’s quirky regular girl in Confessions of a Teenage Drama Queen? Yeah, Kate doesn’t even have a cool Megan Fox look. And the writers haven’t put in enough effort to make her a worthy villain – she’s a bitch with lame insults who says “whatever” a lot, and Lizzie generally only seems slightly irritated by Kate’s mocking. She’s awful and I’m grateful the writers took a break from her for one episode.

This one starts with Mr. Pettus, a.k.a. Phil Diffy’s dad, passing out career aptitude tests for everyone. I never had to take one of those, but kids shows made me believe they were going to be a central part of my life. After class, Gordo complains that Mr. Pettus has been giving him bad grades and must hate him. He tries to figure out if he has any disgusting features that might make someone despise him, and the show makes an unkind joke about unibrows that this reviewer, who had a unibrow the entirety of her first year of middle school, did not appreciate. Lizzie is wearing a hell of an outfit in this scene.

At dinner Matt announces he wants to be called “M-Dogg” now and the show plays a hip-hop beat every time he says it. There’s an uncomfortable moment where Mrs. McGuire says “Don’t you think M-Dogg is a little too…?” and struggles for the word. Holy shit, Mrs. McGuire is gonna say something racist! She finally settles on “different” so the show dodged a bullet there. Matt clarifies that he wants a name that’s more “street.” Oh boy.

The next day, Lizzie wants to rush to science to see what grade she got on a project. She says, “Come on you guys, my bangs are growing faster than you’re MOVING!” in a really awkward way, one of several times in the episode it’s clear she memorized the line but didn’t understand how to deliver it like a joke. This is one of Hilary Duff’s big problems on the show and it’s especially apparent in episodes like this one that give her a lot of quips. I don’t know why no one on set directed her better. In science, she sings “A B+, that’s what I’m talking abooouuut!” in a way that’s goofy and incredibly charming. I don’t blame Hilary Duff, is what I’m saying. Anyway, Gordo gets a B on a really in-depth paper and Lizzie gets a B+ on her lame-ass paper “Our Friend the Dolphin” and Gordo is mad. At home the next morning Matt has gone full M-Dogg with a new outfit, lots of slang, and a tough vocal affectation, and the McGuire parents are horrified. To the show’s credit, it actually takes the time to explore the appeal of hip-hop as opportunity for performative masculinity for middle-class suburban white males with a scene of pretty interesting discussion. Haha, I’m totally kidding, they just make jokes about Snoop Dogg and make Matt change clothes before he can go to school. Mrs. McGuire asks that he find an outfit that’s “a little less…” with another pause that makes me wonder if they’re gonna make her say something kind of racist but she ends up saying “Barnum & Bailey,” an interesting save. There’s a super brief – like 5-second – moment of Mr. and Mrs. McGuire freaking out that they’re “in over their head” with Matt but worrying that they can’t be, because they’re parents. The episode drops it immediately and never revisits it. Sometimes they want us to care about the parents’ motives as parents but never enough to commit screen time to it.

Back in Mr. Pettus’s class, he makes a lame joke and Lizzie giggles loudly while Cartoon Lizzie explains that she always tries to give teachers a pity laugh. But Mr. Pettus smiles back at Lizzie appreciatively and I got VERY CREEPED OUT wondering if that was the reason that he was giving her good grades and what THAT could imply, but don’t worry, that’s another detail the show drops immediately. This scene only exists to give back the career aptitude tests. Miranda announces as they’re waiting for theirs that her main priority is a career that gives her lots of money, and there’s a fantasy sequence of swimming in cash. 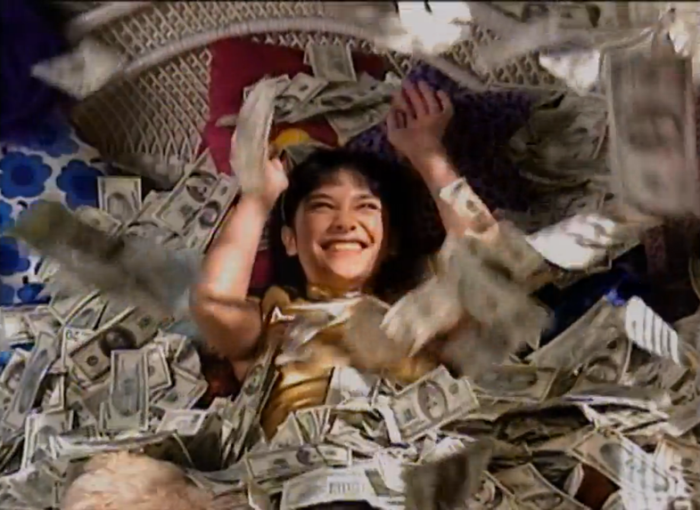 Get yours, Miranda! I respect the shit out of that. Gordo asks if she doesn’t want to follow her passions, and she says “One of my passions is money.” Miranda’s head is on straight. But they get their tests back and they say Miranda should be a Navy SEAL, Lizzie a cosmetologist, and Gordo a blackjack dealer. Everyone is bummed and thinks their lives are over. (Sidenote: I can think of no better career for Lizzie than cosmetology. Look at her hair and nails in every scene. They should have given her a way worse option.)

At home Lizzie polishes up her project “Our Friend the Brain” and I really enjoy the show’s commitment to her dorky lame project titles. Her marker runs dry so she has to borrow one from M-Dogg. She calls him Matt but of course he ignores it and she has to say, “Yo, M-Dogg, hook me up with another marker” while Matt does a terrible dance to hip-hop music. The very next scene is of Mr. and Mrs. McGuire calling him M-Dogg as they invite him to watch a movie with them. They agree to call Matt “M-Dogg” if he’ll refer to them as “Dee-Dee and Mew-Mew” like he did when he was a baby. Matt is embarrassed at the thought of using baby talk in front of his friends. It’s reverse psychology, or something.

I think something must have been cut because he initially asks why everyone is calling him M-Dogg and Mrs. McGuire explains that they agreed as a family to honor his wishes. Seemingly 60 seconds ago Lizzie was calling him Matt. Also, the scene is just the parents and Matt, with close-ups of each. But in the bloopers, you see Lizzie lying on the floor. This was super weird to me, because either something was cut or they just let Hilary Duff lie on the floor during scenes she wasn’t in. Diva alert! (She’s actually wearing her outfit from “Our Friend the Dolphin” scene, so this scene was presumably initially supposed to be from a few days before she does her brain project. They must have fucked up their timeline badly, because Matt is M-Dogg in multiple scenes, so it would not have made sense to have the Mew-Mew and Dee-Dee solution before her brain project, where she calls him M-Dogg. Clearly they realized that in editing, but something was badly botched in filming.)

Gordo calls Lizzie and asks her to turn in his project with her name on it, because he wants it to get the grade it deserves. At school he further pesters her by whining that he doesn’t need good grades anyway, since he’s doomed to the life of a blackjack dealer. Lizzie caves and agrees to swap projects.

Cut to a week or so later when grades are handed back and WHAT IN THE GODDAMN SHIT IS THIS?

LIZZIE MCGUIRE, YOU ARE AN OUTFIT REPEATER!!

Man, as much as I have Thoughts about that line in the movie – what middle schooler owns enough clothes to wear a new one every day for years? – this is ridiculous. The same outfit twice in the same episode?? Miranda is wearing the same outfit too! What on earth was the costume designer thinking putting TWO characters in the exact same costumes for the setup and climax of the episode? There’s zero chance that these were supposed to be the same day at any point in the process. That wouldn’t make sense for the story, and anyway, Gordo is wearing a different outfit! This is MIND-BOGGLING. I cannot actually fathom what happened to this script in between writing and filming if they fucked up the M-Dogg continuity AND indicated that the costume designer should put TWO MAIN CHARACTERS in the same costumes for the beginning and ending scene, presumably set two to three weeks apart. This episode is a damn disaster!

ANYWAY, of course “Our Friend the Brain” gets Gordo a C and the brain model gets Lizzie an A+. Gordo makes an enormous scene where he yells “I’m getting the SHAFT in this class!” (Emphasis his!) Whoa there, Gordo and writers! My friend Sally got reprimanded for using that expression in 10th grade because our teacher said it had “anatomical connotations” and was not school-appropriate. Gordo’s brain project overheats and explodes on him and Mr. Pettus and Lizzie, who was clearly blocked to come forward at one point in the rant exclusively because they wanted her to get covered in brain splatter.

Kid in the back could not care less about this. I hope that extra wasn’t paid for that shoddy acting.

Mr. Pettus dismisses the class except for Gordo to reprimand him. Lizzie and Miranda eavesdrop – pretty literally, as Lizzie hangs from the top of the doorframe to hear in through the window over the door. Guess why they do that. Guess! Yeah, it’s cuz Lizzie’s gonna fall later.

Gordo explains that he made Lizzie swap projects to prove Mr. Pettus hates him, and Mr. Pettus explains that he’s been giving Gordo bad grades when he felt Gordo was capable of working harder, to motivate him to always do his best. What the fuck, Mr. Pettus! Don’t you have a rubric? Grading isn’t subjective based on which kids are the smartest! He makes an inspirational teacher speech about hoping Gordo’s “reach will always exceed his grasp” and tells him career aptitude tests are meaningless and Gordo has limitless potential. Gordo should threaten to tell the principal about Mr. Pettus’s god complex and insane grading scale but he doesn’t. He just leaves and Lizzie falls. Gordo passes on what Mr. Pettus said about the career aptitude tests just suggesting wacky things to consider and Lizzie compares it to trying on bare-midriff tops at the mall even though you know your mom won’t let you buy one. That’s a good middle-school reference except Lizzie totally owns a bare-midriff top she almost wore on Picture Day! The theme of this recap is that continuity is not Lizzie McGuire’s strong suit.

At home Matt asks to be called Matt again, and Lizzie reflects on the “Jedi mind tricks” adults play on children, like her parents’ Dee-Dee and Mew-Mew stunt or Mr. Pettus’s totally unethical grading system, and concludes that it’s fine because it’s for kids’ own good. Bullshit, Lizzie! The moral here is clearly to never trust authority. Grownups are just as fucked-up as kids and no one knows what they’re doing and those in power wield their influence to work out their own warped issues. Besides that and the INEXCUSABLE lack of costuming continuity, this episode is innocent enough and I didn’t have to see Kate’s stupid face. An episode based primarily around Gordo is pretty solid, because Gordo has really strong characterization and motivation, unlike every single other character on the show. So this one was okay overall.