Man, I wish I knew more about how these episodes were written. When you watch all of them back to back, it’s pretty obvious that some had different writers in charge because they seem off somehow. This week’s episode is a good example. There’s a heightened, joke-a-minute style that’s not typical at all for this series. For instance, at one point Gordo makes a lame joke and Lizzie shrieks, “That’s not a joke! What does a cannibal call a phonebook? A menu! Haha! Now that is a joke! HA HA HA HA HA.” This entire episode is like that. The directing is also subpar, as lines are delivered really sloppily with diction problems everywhere.

This one starts with Gordo bothering Miranda in a Glee Club rehearsal because he hates Glee Club but wants to participate to have a fine art on his résumé to apply to charter school. That’s dropped immediately, but it raises a lot of questions for me. Is Gordo planning on leaving the school? Or is he hoping to get in for high school? Is Gordo abandoning them? I hate him and would be fine with that, but it’s still a big shakeup.

Amusingly, Cartoon Lizzie gripes about how Glee Club only sings really old songs, like from the Civil War era, because I’m pretty sure the show just grabbed songs in the public domain so they wouldn’t have to pay for them.

Lizzie lurks at Glee Club to insist that Gordo and Miranda sign up for “Fact-athalon” with her so they can win a trip to Miami. Miranda gasps, “Madonna loves Miami!” and we get a fantasy sequence with a mediocre Madonna impersonator. 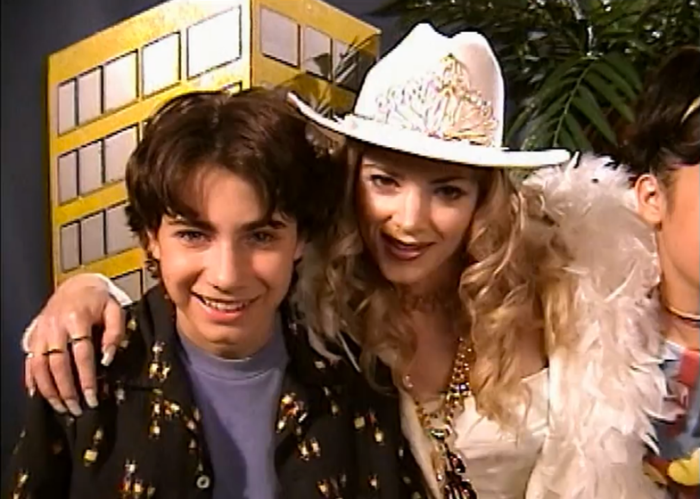 Is Madonna associated with Miami in any way? When I think of Miami and pop culture references, I think of Will Smith. I mean, nowadays I think of Pitbull, aka Mr. Worldwide née Mr. 305, but for the time I’d say Will Smith would be the obvious reference. 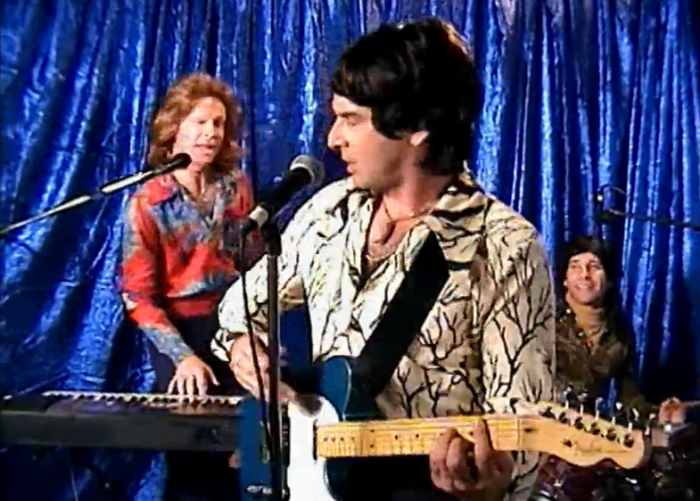 That feels out of character for Sam, based off what little character he has.

Lizzie, Gordo and Miranda discuss putting in some hard work with their teacher as their faculty advisor, only to have Mr. Dig pop up and announce that their teacher has left and he’s their new teacher and faculty advisor. I’ve been wondering lately if the writers regretted making him a substitute teacher instead of a real one that they could use more often, and I’ve gotten my answer.

Matt and Lanny hold auditions for a third member of their band, which is basically one big montage. Matt tells one girl, “Great, babe. We’ll call you.” He’s pretty clearly supposed to hold up his fingers like a phone on “call,” but Jake Thomas messes up and instead just points to his face, then realizes it’s wrong and makes the phone gesture on the next line.

Then IRL drummer Rick Marotta shows up and Matt reads his credentials – “You’ve played with  Linda Ronstadt, James Taylor, Steely Dan, and John Lennon?” – but mispronounces Linda Ronstadt’s name (as “Ronstand.”) The director is really phoning it in this episode.

Kate, Claire, and Tudgeman are apparently the trio’s rival team for the Fact-athalon. Is Kate supposed to be smart? I wish her character was given even a single personality trait besides “mean.” CALLOUT TIME:

KATE SAUNDERS-SANDERS, YOU ARE AN OUTFIT REPEATER! Bitch wore that outfit last episode.

The trio meets with Mr. Dig, armed with protractors, compasses, rulers, and a giant box of books, but he says they’re gonna learn math by playing blackjack. Gordo asks if Mr. Dig understands what the Fact-athalon entails, but Mr. Dig is like “I’m not a regular teacher, I’m a cool teacher.”

A significant chunk of this episode is yet another big montage, as Mr. Dig immerses them in all kinds of zany and fun interactive lessons that don’t seem to be about facts at all, and Kate’s team gets more and more stressed as they cram for the actual challenge at hand. Devoting most of the episode to montages seems like lazy directing to me, so I looked it up and this is the same director I always harp on when he shows up. He directed “Between a Rock and a Bra Place,” “Sibling Bonds,” and “When Moms Attack,” some of my least favorite episodes so far. Weirdly, though, he also directed Life-Size and A Cinderella Story, both of which I liked a lot as a kid. I actually wasn’t really a kid – I was like 14 when A Cinderella Story came out and I watched it with some actual children I was babysitting and I ended up crying a lot, which was embarrassing. But it was emotional!!

The McGuire parents hate listening to Matt’s band rehearse, which is surprising because you’d think that his dad would expect noise from band practice based on his experience with Midnight Sam and the Love Patrol, and they eventually beg him to give up on his dreams. The McGuires are dropping the ball big time on parenting Matt. He’s already a monster, and now he’s also going to be a resentful monster.

At the Fact-athalon, Kate’s team has developed nervous tics and rashes because of the stress of their studying. As someone with psoriasis which flares up all over my body when I’m stressed, I sympathize with them. Lizzie’s team talks shit about how they’re going to beat them.

And then they don’t! Kate’s team totally destroys them. I’d been expecting this to be a lesson about how learning can be fun or something, but the team that didn’t learn any facts gets creamed at the Fact-athalon. This episode just picked up major points for me for a realistic depiction of the consequences of being a fuckup.

This scene with Kate screaming facts made me realize that Ashlie Brillault totally should have been cast as a nerd character, like a Tracy Flick or early Hermione. Granted, she’d need to be cast specifically as an annoying nerd, but she pulls it off with her big, floofy hair, fuzzy sweaters and decidedly uncool vaguely Midwestern accent.

Matt’s band does a gig in the backyard and it is way better than they’d been in rehearsal and also way more rockabilly.

His parents are impressed, but of course he says he gives up music forever because now he’s done the band thing. On the list of dumb or annoying things Matt has done, that doesn’t even rank for me.

The trio hears that Mr. Dig is quitting because he failed them so badly, so they go to his office and tell him they learned a lot from him and he can’t leave because he’s a great teacher. Well, yeah, but it wasn’t a Learn-athon. It was a Fact-athalon and they didn’t study even a single fact.

The episode ends with Kate, Claire, and Tudgeman complaining that their trip to Miami was horrible and they got sunburnt and shit, so the trio thanks Mr. Dig for failing them so badly they didn’t win the trip.

That’s all pretty dumb, but I’m glad that they didn’t win with their stupid non-fact-based studying system. And since this episode was almost entirely montages and songs, it went by way quicker than usual. Overall I’d give this one a B for that reason.

Unnecessary references: Two visual references with Cartoon Lizzie. When Gordo yells at Lizzie, we get a reference to that Maxell stereo ad from the 1980s:

And a reference to Hamlet, complete with a line starting with “Alas, poor Kate:”

Notable fashion moments: Kate wears a mini skirt in one scene and a super low-cut top with a push-up bra in another scene, which I guess disproves my criticism from last episode that she dresses like a grandma. Lizzie wears a very shiny all-over pink ensemble.

Other interesting tidbits: For a non-actor, Rick Marotta is really goofy and fun. The McGuires have a picture of someone on their fridge and just this episode I saw it up close enough to wonder if it’s of a young Miranda. Can anyone tell?