We’re almost done with season one, y’all! Two pretty memorable episodes are coming up, but first we gotta get through this one.

At the Digital Bean, Lizzie babbles on about lip gloss while Gordo rambles about an upcoming monster truck rally. If you’re asking “Since when is Gordo into monster trucks?” you’re in luck, because Lizzie asked him that exact question verbatim. Gordo responds that he’s a GUY. Hope that clears that up! The point of this scene is that guys and girls have different interests. It’s a little subtle so Gordo says it three times.

Miranda raves about some guy named Ryan Adams – who is not the same Ryan Adams who married Mandy Moore and released an album of weepy Taylor Swift covers – and how Ryan Adams performed a beautiful monologue in drama class. Lizzie says, “Don’t you know what this means, Miranda? You’re in love!” I really hate it when TV shows overuse the word “love” prematurely in relationship plotlines, and I’ve never seen it done on a kids show, which is somehow way worse. That’s weird and fucked-up, right? Just say she has a crush. We get a McGuire kids bickering scene. Almost every episode of this infuriating show includes a scene of the McGuire kids fighting with each other, and I usually omit it because it never adds anything to the plot and also because I hate having to think about it. I despise the Disney Channel trope of the hellion younger sibling always driving the protagonist nuts. Why does it exist?!? On every show?!? So younger kids will watch the shows too? And see themselves represented in the worst character?

On Lizzie, these scenes usually play out with Matt sniveling insults at Lizzie (usually that she’s ugly) and Lizzie screaming at Matt (usually that she’s going to hurt or kill him). Sometimes, as here, the McGuire parents will drone a monotone “leave your sister alone.” It’s all insufferable and it happens almost every fucking episode.

At school, Miranda plans on telling Ryan Adams how good his monologue was and opens her locker to check her face in the mirror. She smacks Lizzie right in the face with the locker door and of course Lizzie falls all the way to the ground. Disney Channel really gave me unrealistic expectations of the amount of force it takes to make someone fall. Miranda tries to help her up but drops her again. The physical comedy of Lizzie falling is HILARIOUS. I see why they do this same gag constantly.

In a terrible bit of acting, the kid playing Ryan Adams walks purposefully up to Miranda then stops right in front of her, even though it’s clear from the scene that he’s supposed to be walking by and get stopped by Miranda. Miranda stammers a whole bunch. This seemed out of character, but once Ryan Adams leaves, Miranda says with horror, “I just reminded myself of you just now!” to Lizzie, and adds, “I don’t get nervous. That’s you!” Hey! The writers thought to give the characters individual points of view!

Gordo starts hanging out with Matt because he wants a male friend so badly he’ll settle for the worst male on Earth. He complains that life would be better if Lizzie were a guy. Wow, does Gordo have issues.

Lizzie writes down some things for Miranda to say to Ryan Adams, and Miranda holds a conversation so successfully that Ryan Adams asked her to eat lunch with him the next day even though it’s lunchtime when this conversation happens and they could just eat lunch right then. Her conversation with Ryan Adams happens offscreen, so I’m not clear if Miranda was holding Lizzie’s cue cards the whole time. If so, Ryan Adams must be really dumb. But Lizzie is happy that Miranda is now “H&H” with this dummy, which I now know means “hot and heavy” thanks to commenter Danielle. Thanks for reading, Danielle!

Things get zany when Miranda asks Lizzie to hide nearby during her H&H lunch to give her things to say. Imagine this relationship taking off and Lizzie following Miranda and Ryan Adams for the rest of their lives, telling Miranda every single thing to say to her boyfriend and then husband.

Matt and Gordo invent a Hacky Sack-basketball hybrid and Gordo says that Lizzie never does anything that fun. Matt says that Lizzie would be too afraid of breaking a nail. SERIOUSLY? This is literally the exact same thing  that Miranda mocked Kate for just one episode ago, which I said seems like something Lizzie or Miranda would do. GET YOUR SHIT TOGETHER, WRITERS.

We get a montage of Gordo and Matt having fun, which is noteworthy for one reason: footage from this montage was included in the video they showed Gordo to get him to quit Dwarflord two episodes ago! That episode definitely aired before this one, so in this show’s universe Gordo was shown a clip of himself from the future.

The video in “Gordo and the Dwarves”: 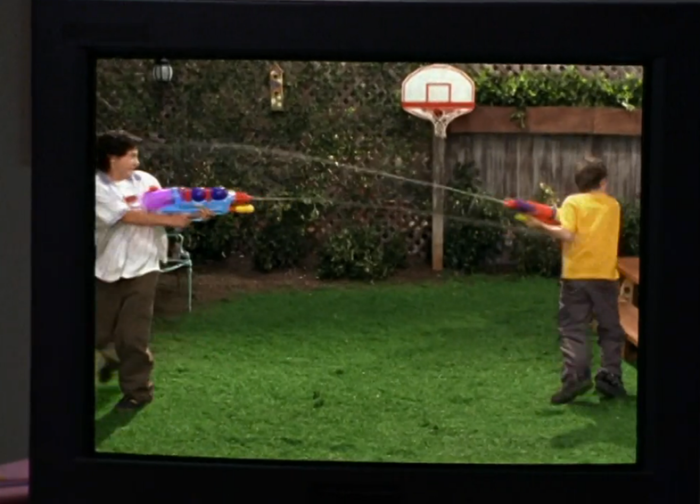 This week’s montage of real events happening during this episode:

GET. YOUR. SHIT. TOGETHER. EVERYONE INVOLVED WITH THIS SHOW.

Lizzie hides in a fucking garbage can to prompt Miranda on what to say at her lunch with Ryan Adams. Of course, Lizzie gets stung by a bee and yells things like “Ow! I got stung!” that Ryan Adams doesn’t hear and Miranda does and repeats them without Ryan Adams thinking it’s weird. Lizzie falls out of the garbage can and Ryan Adams only thinks it’s a little weird. I’m not very invested in Miranda ending up with this guy.

Lizzie feels bad and decides to talk to Ryan Adams for Miranda. This scene begins really strangely, with Lizzie walking in slow motion through the halls as a poppy love song plays, the kind of song that sounds so 2001 Disney Channel it’s as if 2001 Disney Channel itself became sentient and produced it. It all feels like the setup for a romantic moment, but we the audience know that that is not the case, so…is Ryan Adams hearing this music in his head?

I guess so, because we get a wacky misunderstanding. Ryan Adams says that he realizes that it was Lizzie with a crush on him all along and she’s all like “Wha-? Huh? No -” and Ryan Adams doesn’t listen to her at all and ask her out on a date at the Digital Bean but Miranda overhears! And Miranda’s all like, “Wooooow, bitch, I see what’s up” and Lizzie’s all like “Wha-? Huh? No -” and Miranda says “Save it, Lizzie! You’ve said enough” and storms off because if Lizzie were allowed to complete a sentence this whole episode would fall apart.

This is all extremely unrealistic and very sitcommy, and also does Ryan Adams like girls who hang out in garbage cans? If he really thought Lizzie was into him after that H&H lunch date he should be seeking a restraining order.

Gordo gets exhausted hanging out with Matt and says he’s going to hang out with Lizzie again. Because he’s exhausted. Not because he realized that there’s an inherent value to female company after all.

Lizzie drags Miranda to the Digital Bean to talk to Ryan Adams and Miranda realizes that she was attracted to the smart character that Ryan Adams played in his monologue and not the dumb idiot that he is in real life. Miranda says she doesn’t like crushes anyway and love is gross. I fucking adore Miranda. I wish the show were called Miranda Sanchez.

I don’t know if this was intentional or not, but when Miranda and Lizzie leave Ryan Adams to talk about how they’ve been Bad Friends to each other, Ryan Adams immediately starts talking to another girl. Like, in under 3 seconds after Lizzie and Miranda leave the table, when he came to the Digital Bean specifically for a date with Lizzie. Fuckboys gonna fuck!

This episode was not great. A weirdly prevalent problem on this show is bits that just straight-up don’t work at all. Lizzie walking down the halls in slow motion as a love song plays for no reason is possibly the best example so far of a bit that doesn’t work at all. I have no idea why it’s there, and in fact it is so badly done that it feels bizarre and confusing. I watched this episode several times and couldn’t make heads or tails of the intended purpose of that bit, and yet it ended up in the final cut that aired on television. TRY HARDER, I say!

Unnecessary references: The title might be a reference to The Courtship of Andy Hardy? A 1942 Mickey Rooney movie? I like how the writers don’t even attempt to make their references remotely relatable to their audience, and by “like” I mean “I’m being sarcastic.”

There is SO much camo and SO many bandanas on this show. Who should I blame for that? Destiny’s Child? Tina Knowles has so much to answer for.

Other interesting tidbits: When Miranda references Ryan Adams’ monologue, Gordo and Lizzie chime in as if they are all in a drama class. Since when are they all in a drama class? Miranda sucks at acting and is pursuing singing instead and the other two don’t give a shit about the performing arts. Also, when they cut to a flashback of the “drama class,” it’s a full, packed theater. Two weeks in a row Lizzie has gotten mad and Cartoon Lizzie has yelled, “That’s it! The gloves are coming off!” because these writers love constantly giving me new examples of their laziness.