The costume design on Lizzie McGuire might be the single most memorable thing about it. A million articles have been written about how iconic, important and inspirational the show’s outfits were, and this is not going to be one of them.

Look, I get the appeal. I do. The clothing on this show is fun and vibrant and functions as perfect wish-fulfillment for preteens. Lizzie and Miranda dressed like a little girls imagine rockstars dress. Middle school would have been a lot more fun for me if the funky aesthetic of this show was actually de rigueur in real life at the time.

But as a production element on a TV show, it fails in every possible way for me. Good costume design communicates information about the characters. But on Lizzie McGuire, Lizzie is average and insecure yet always dresses flashy and over-the-top. Miranda is obsessed with fitting in but dresses punk. Kate is the most popular girl in school but always wears either plain, boring outfits or fussy sweaters, usually in washed-out pastel colors that don’t make her stand out. The weird thing is that I don’t think the costume design was always meant to be this bad! The pilot had a different costume designer than the rest of the series. Christine Peters, costume designer for The X-Files and Joan of Arcadia among many other shows, was in charge here before my personal nemesis Kimberly Adams-Galligan took over.

Let’s look at Lizzie’s outfits from the pilot: This costume design is goddamn perfect.

Lizzie looks exactly like the character she’s supposed to be! Completely average. Trying a little too hard with lots of bracelets or some butterfly clips. She looks like someone figuring herself out.

Miranda, on the other hand, looks edgier and more confident. See her insane hairstyle above, or this denim and camo look: 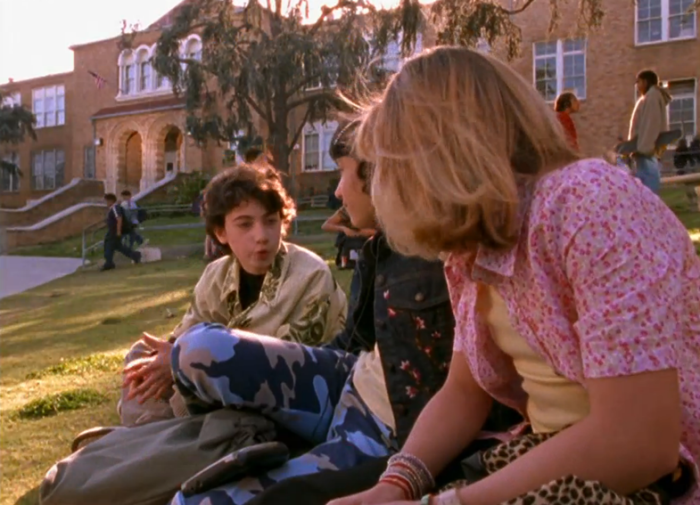 Doesn’t it make more sense to have Miranda in camo than Lizzie, who wears camo about every other episode this season?

Then look at Kate’s squad:

Much trendier and girlier – just girly enough to make Lizzie and Miranda look more plain and tomboy-like in comparison. And Kate’s sleek hair her makes her look much more like a cool girl than the absurd curly messes she sports the rest of the series. I think the second costume designer wanted to signal that Kate is unlikeable through annoying clothing choices, which is so dumb. Kate is already unbearable. Adding terrible clothes just makes it seem completely nonsensical that she should be popular.

When you compare Pilot!Lizzie to the one we get with the rest of the series…

I don’t know if Lizzie McGuire would have stood out in the same way without its signature costume design, but, for me, keeping the original look would have solved a lot of problems I have with the series. The pilot’s costume design made Lizzie seem softer and more vulnerable. Her later costumes are weirdly tough for the character she supposed to be. We’re supposed to read her as sweet and somewhat shy, but she’s always in chokers or camouflage with dyed streaks in her hair.

It’s also completely unrealistic. No one dressed like that, at the time or ever. A continuing problem I’ve had with this show is that it can’t seem to decide on its level of reality – the costumes and editing choices often make it seem over-the-top and occasionally even surreal, but the writing attempts to establish that the problems faced by the characters are realistic and relatable. Compare it to the much more stylized (and seriously so much better) Ned’s Declassified School Survival Guide, which set its middle school pitfalls in a much more cartoonish universe. A broader, goofier Lizzie would have justified the colorful production elements and captured the weird Y2k-era aesthetic even better.

So why did they pick this look and abandon the design of the pilot? Maybe it was a simple scheduling issue – I know lots of pilots use different production staff since they shoot early. Or maybe the studio didn’t want Miranda standing out more than Lizzie. It could also be part of an overall design choice for the show, as the pilot was shot in a much more drab home and school but the rest of the season was a color explosion in every location.

Whatever the reason, the costume design we ended up with just doesn’t work. Baffling choices pop up every episode, and Lizzie ultimately doesn’t look relatable, normal or unsure of herself, all of which she’s supposed to be. It’s like they decided that a flashy costume design was more important than the story they were trying to tell, which is such an amateur mistake.